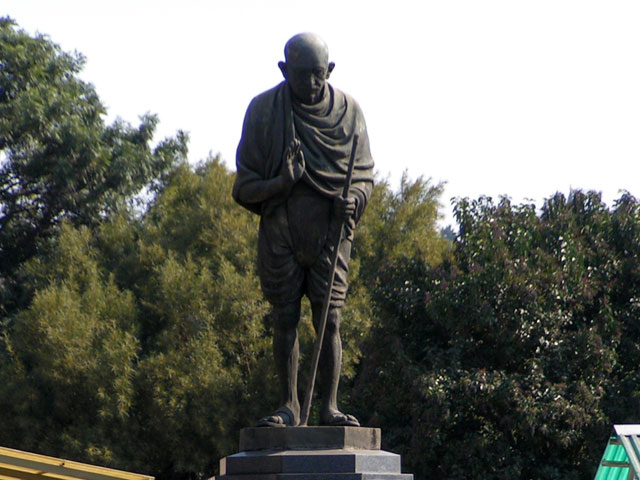 STATUE OF GANDHI AT THE THIRUKOOTAM AND SHREE GANASER TEMPLE

This is the oldest temple in Ladysmith. The Hindu Thirukootam, built in 1910, and the Shree Ganaser Temple and hall, erected in 1916, were combined into the current form. Declared a National Monument in 1990, the temple was built by Alaga Pillay from India.

While Ladysmith was under siege, Gandhi (Mohandas Karamchand Gandhi, 1869-1948) was a stretcher bearer with Gen Buller’s relief force. He trained in Durban under Dr Booth. As a young advocate Gandhi saw the need and opportunity for the Natal Indians to prove to Britain they deserved her protection. He convinced his countrymen to qualify as Dhoolies (stretcher bearers). Gandhi trained some in Ladysmith and it is believed that he left Ladysmith on the last train before the siege started. He travelled to Estcourt where he trained more Indians to become stretcher bearers. In his autobiography he reveals how, after the Battle of Colenso, he helped to carry Lord Robert’s son, Lt Freddy Roberts VC, to his final resting place.

Gandhi and his stretcher bearers were reported to have done excellent work during and after the Battle of Spioenkop.

In 1933 Ladysmith’s Hindu community paid tribute to the Great Mahatma by celebrating the centenary of his coming to Natal. A torch was erected in the Town Gardens, its eternal flame burns in memory of all who follow is doctrine of “truth and non-violence”.

The 2.7m statue of Gandhi was imported from Bombay and unveiled in October 1970 by Sanathan Dharma Sabha. The Lord Vishnu Temple serves as utility hall and place of worship and it is built on the spot where Gandhi started his march to the Transvaal in 1913, in his fight for women’s rights and the abolishment of the £3 tax law.